Roanapur is the fictional city in Thailand where the series takes place. Lagoon Company operates there, Alongside Hotel Moscow, the Hong Kong Triad, the Colombian Cartel, the Mafia and other crime groups. Roanapur is considered by many, including its inhabitants, to be a den of crime and corruption.

It was explained by Mr. Chang that thirty-five years before the start of the series, Roanpur was a dying port town.

During World War II, the Japanese dredged the harbor to use it as a naval base. Afterwards it became a transit port for smugglers, and undesirables continued to flock to it.

After the Vietnam War, Roanapur became a city where deserting soldiers and prostitutes ran wild. Chang goes on to state that Roanapur is a criminal hub, built by criminals cooperating for single common interest.

While Rock is examining a map during episode 2 of season 3, Roanapur is shown to be in the geographic location on or very near Trat, Thailand. 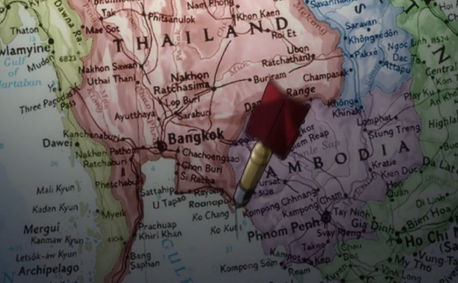 Roanapur is an old Thai port in southern Thailand, where the deserters and the losers of the Vietnam War took refuge and were joined by the worst villains and criminals of the planet. Prostitutes, drug-addicts, mercenaries, killers, and psychopaths of any nationalities compose the population of Roanapur.

The Yellowflag Bar is the property of Bao. It is in this disreputable place that the worst criminals of Roanapur pass time between missions.

In the entrance of the gulf which leads to the Roanapur port, there is a statue in ruin representing Buddha, which is "supposed to bring peace to the world"

Roanapur is accessible from the continent thanks to a bridge. In the extremity of this bridge, there is a slip knot. This rope warns visitors who want to go to Roanapur they have to expect everything if they enter the city.

This article is a stub. You can help Black Lagoon Wiki by expanding it.

Community content is available under CC-BY-SA unless otherwise noted.
Advertisement